Our body’s primary motion-sensors include the inner-ear sensors, our eyes and deeper tissues of the body surface. Technically speaking, the inner-ear sensors detect changes in acceleration rather than motion, such as the movement a boat makes when bobbing on top of waves in the ocean. When our body’s internal instruments sense these acceleration changes, and those changes aren’t confirmed by other sensory inputs, such as visual feedback from our eyes, the conflict in the sets of data they deliver to the brain can trigger motion sickness. Scientists aren’t sure what causes the nausea that comes with motion sickness, but the most popular hypothesis is that the conflicting data from multiple sensors causes the brain to assume that toxins have been ingested, and the body’s automatic response is to internally induce vomiting. 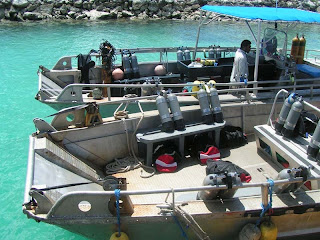 Even the smallest things can disrupt comfort while traveling and diving. Perhaps nothing ruins a dive trip more quickly than an urgent need to “feed the fish” from the railing. Thus, most divers try very diligently to avoid getting motion sickness – but how? What really works?

First, we need to understand what causes motion sickness. Often termed “sea sickness,” this malady really has little to do specifically with the ocean and everything to do with motion, so “motion sickness” is a more universally accurate term. When such motion causes the tiny sensors in our body to register something’s amiss, we start to feel a bit queasy, and if not remediated quickly, nauseous.

So how can we avoid motion sickness? Here’s an 11-part strategy:

1. Need to feed. A meal before you board is highly important. For most people, an empty stomach is more sensitive to being irritated, so filling it with comfort food 45-60 minutes before leaving shore is smart. Load up on carbohydrates at breakfast and avoid acidic and greasy foods, as they may contribute to motion sickness. Lastly, avoid alcohol and cigarettes.

2. Medicate. If you know you’re especially prone to motion sickness, investigate the use of over-the-counter antiemetic medications such as meclozine (Bonine, Antivert, Meni-D, Antrizine) or Dramamine. Meclozine reduces the activity of the portion of the brain that controls nausea. These medications are highly effective in most individuals, and thus can be a preventive measure for short trips or for mild cases of motion sickness. Be sure to start medicating the night before the dive trip to start establishing the proper blood level of the drug.

3. Go gingerly. In addition to medications, many divers swear that the intake of ginger is a simple and tasty way to help avoid getting ill. If this works for you, it’s an easy solution – just carry a Ziploc baggie of ginger snaps aboard and munch on them before and between dives. Although it’s not yet clear to researchers exactly how and why it works, studies show that the ginger root contains a number of chemicals that seem to help relax the intestinal track. As a result, ginger is often helpful in reducing the risk of nausea.

4. Avoid “conflicting instrument readings.” Look out across the horizon so your eyes can register the same type of acceleration changes your ears are reporting. Avoid visually focusing on things that are close-by, and most especially, avoid reading for more than a few seconds at a time. Also, face the direction the boat is traveling.

5. Your nose knows. Odors can complicate the mix of signals to the brain, increasing your likelihood of becoming ill. Avoid smelling diesel fumes, cigarette smoke, perfume and of course, anyone else’s vomit.

6. Minimize movement. Standing in different locations on the boat’s deck will result in different amounts of velocity/acceleration being transferred to your body. Stay topside, close to the center of the vessel.

7. Keep hydrated. Continue to drink plenty of fluids while on board and throughout each surface interval. This will help keep your stomach more full and will help your body metabolize food and process everything else better.

8. Stay cool. If you become overheated while on deck, you’ll be more at risk of becoming ill. Wear a cap to keep the sun off your head and face, sit in a shady location between dives and peel off part or all of your wetsuit.

9. Heads up! If you feel the urge to vomit, move to the leeward rail (with the wind at your back), lean forward and try to direct your explosion toward the sea. The fish will thank you. Never go into the head (marine toilet).

10. Dive in. If you do begin to feel the early signs of motion sickness, get into the water and submerge several feet below the surface, doing so will usually quell the queasy feelings because your body will stop receiving the conflicting acceleration readings.

11. Regulate it. If you happen to become ill while underwater, such as just after submerging, it’s usually perfectly OK to vomit in your regulator. It’s not the most enjoyable experience, but it’s typically over very quickly and you’ll feel better almost immediately.

The bottom line is that motion sickness can be managed and/or minimized by planning ahead with sufficient sleep, proper food intake, use of medications and consciously taking avoidance actions while on-board, before the first signs of motion sickness manifest.

Thanks to Scuba Diving