Skip to content
Home/Blog :::: KSG Scuba Scoop/Jill’s Journey for “We are Water”
Previous Next

Jill’s Journey for “We are Water”

When Jill Heinerth isn’t cave diving, she’s submerged in the issue of water.
Water quality, quantity, access and overuse are all critical matters for her.

“All that we have wrought upon our land will be returned to us to drink. People need to know where water comes from, how they may unintentionally be polluting it and how to conserve it,” says Jill. “We are running out of clean sources we can afford.”

Options such as desalination of ocean water are too costly, she says, adding that it is 100 times cheaper to conserve, protect and reuse our ground water.

In May of 2013, Jill and her husband, Robert McClellan, will begin a 7,500-kilometre bicycle tour from the Pacific to Atlantic coasts of Canada. The purpose of their journey, part of a project called “We Are Water,” is to raise awareness in the life-sustaining resource too many of us take for granted. Its website is: www.wearewaterproject.com

“Every time I am in a cave, I am inside the veins of mother Earth, swimming in the life blood of the planet. I’ve been doing this for more than 20 years. I see the flow changing. Fifteen years ago, it might have been almost impossible to swim against the current coming out. In some cases it is reversing, sucking in the garbage,” Jill says, explaining that when the flow slows enough, underground rivers turn around and back flush.”

Now living in High Springs in north Florida, “the cave-diving Mecca of the world” with more than 200 springs within an hour’s radius of her house, Jill has found the deterioration of that resource troubling.

“There are some springs in Florida that no longer flow at all. They are just little depressions in the ground. They collapse because the water stops.”

Jill believes the first remedy for our water problems is education. “People don’t intentionally pollute,” she says, adding that it is absolutely vital the protection of water be taught within the school curriculum. 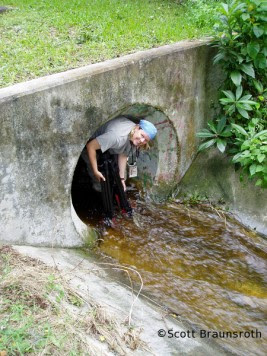 Jill, a Canadian who grew up in Mississauga, Ontario, says Florida residents use six times more water per capita than do Europeans.

“We have a love affair with golf-green lawns. No one has had to consider scarcity of water. They just assume it will be there. We are in a dire situation here and I have to wake people up. We are over-drawing from the Florida Aquifer. We are not keeping track of what we are taking out. We have no idea how much agriculture is using and there is no incentive to conserve because they don’t pay for it.”

The long-term impact of over-use can be critical. One of the “first-magnitude streams” in Jill’s local area – which, by definition, must have a flow of greater than 100 cubic feet per second – is now only pumping 10 cubic feet per second.
When this is happening a stream reaches a point where it is almost not flowing. “The pressure is low and there is not enough rain to make up the difference. The environmental impact is catastrophic.”

Jill worries about people living near her home who are drinking from wells. This is dangerous, she warns, because nitrate fertilizers are not filtered out and they soak into the soil. Another problem is salt water intrusion, which happened in Tampa when the city depleted ground water and the vacancy created an opening that ocean water occupied.
Her role as director/cinematographer for We Are Water is a natural for Jill, whose skill with a camera underwater led to her working with filmmaker James Cameron and several awards. Her husband will be the producer/writer.

“We’re starting in Vancouver. If you go the other way it adds two weeks to your trip (because the prevailing winds are from the west),” she says of the bicycle trip.
They estimate the trip will take four months, of which 90 days will involve riding and the remainder for stops and presentations along the way. The itinerary has not been decided yet but they plan to spend extra time in the Great Lakes area, where the impact of water degradation hits home more directly.

It is important to the couple that We Are Water offers people advice that encourages them to do something positive for water within their own community.

“In terms of preservation, get involved in local politics. We have to start local because that is where most of the zoning and planning is done,” Jill says. “Know your watershed and care about what goes on top of it. I love going to the farmers’ market, but we (Floridians) can’t have large dairy farms. They use up too much water and the nitrates they produce get into water and kill everything down stream. We cannot do that on this landscape. There are areas that can tolerate that but this part of the landscape can’t. The only way to stop it is to get involved.

The damage is usually delayed. In Florida it takes 15 to 30 years before nitrates appear in a spring. The interval varies with soil types. In farming areas in Australia it has taken as long as 100 years. Another problem is flushing old medications down the toilet. They re-appear in samples taken from streams.

As well as their camping gear, Jill and Robert will be carrying projectors, film and a laptop on their bikes, on which they will average 100 to 180 kilometres daily. They will show their We Are Water film, which will be completed in November, on buildings or wherever they can find a white wall. “We will also be shooting our ride as we meet people and hear their local issues, so, yes, another film is in the works, as well as a lot of webcasts.”

They may also do seminars in cities on their route, as well as web blogs and live web broadcasts. They plan to create an educational support curriculum and perhaps, eventually, write a book.

“When we present our films personally, we get incredible response. We want to educate the public about issues, but also concentrate on helping people to love and protect this incredible resource,” says Jill. “We can’t leave them desperate. If they feel hopeless they will do nothing. We have to give them tools to make changes in their own lives.”

Among her suggestions that that can make a difference are:

• Plant native vegetation in your yard that requires less or no water and no fertilizer or pesticides
• Drink tap water in a refillable container instead of buying bottled water in disposable containers
• Recycle and reuse as much as possible because water is an enormous part in the manufacturing process
• Be a part-time vegetarian because meat uses a significant amount of water in its growth and processing
• Eat local, seasonal foods – go to your farmer’s market
Biking, another passion of the couple, and the chance to give Robert, an American, a close-up look at the beauty and immensity of Jill’s Canada, are extra bonuses.

It is also an adventure, something that is no stranger to Jill. She has dived deeper into caves than any woman in history, including forays into Antarctic icebergs and subterranean Siberia. Cave diving at the level she participates is the domain of the elite of the technical diving community. Even for the best, it is extremely dangerous. Some of Jill’s best friends in the sport have died in caves.

One of them was Wes Skiles, who appeared along with Jill in the four-part PBS documentary Water’s Journey, as well as co-writing and co-producing it together. He lost his life shooting underwater for National Geographic. Water’s Journey traces water’s route from a raindrop, to an aquifer and, finally, to the ocean. It won several awards, of which the most significant are International “Deffie” for the Best HD Documentary 2004 and Finalist Jackson Hole Wildlife Film Festival 2003.

Devastated by her friend’s death, Jill is determined to carry on his work of advocating for water conservation and protection through the medium of film.

We Are Water will be a fitting tribute to his life and legacy.