Skip to content
Home/Blog :::: KSG Scuba Scoop/Lessons For Life: Pride Can Be Deadly
Previous Next

Lessons For Life: Pride Can Be Deadly 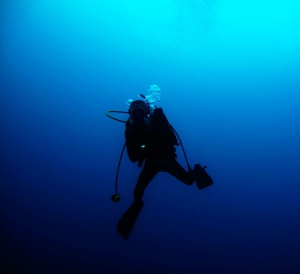 Ray was fairly new to diving, but he loved the gear. He loved to have the best equipment, loved to look at it, handle it and show it off. It made him feel like a real diver to suit up with all the bells and whistles.

He was about 10 minutes into the dive, and everything was going fine. A couple of other divers had gestured to him, pointing at his regulator. He assumed they were telling him that his new regulator looked good in the water, but he wasn’t sure so he just nodded and swam on. He planned to ask them when they got back to the surface.

And then he took a breath and there was nothing there. He was out of air.

Ray was fairly new to diving. He was 53 years old and had been certified for two years. He had an advanced open-water certification but had made only five dives on his own.

Ray’s latest purchase was a new pony bottle and regulator he had attached to the scuba cylinder on his back. While he rarely dived deep and wasn’t really worried about his air consumption, he thought the extra tank looked cool. He wasn’t really sure the best way to set it up, but he was too embarrassed to ask for guidance. He told himself he would ask his instructor next week.

It was a perfect day for diving — sunny and warm. They planned to make two dives on a moderate reef.

The bottom for the first dive was at 50 feet and visibility was good. Ray knew most of the divers on the boat, but he wasn’t close to any of them. He didn’t have a dive buddy for the trip, but they all sort of agreed to dive the reef as a group.

When Ray put his gear on, he was a little distracted by the extra weight from the tank and the hoses from the extra regulator, but he did his best to pull everything together quickly. When the divemaster said it was time to get in the water, he stood up and moved directly to the back of the boat.

A little nervous, he did his giant stride without his regulator in his mouth. The divemaster attempted to stop him, but Ray simply stepped out into the water.

Ray bobbed back to the surface a moment later sputtering and spitting out the salt water.

The divemaster signaled to Ray to put his regulator in his mouth and then gave him an OK signal, which Ray returned.

Ray quickly reached down below the water and grabbed a second-stage regulator and put it in his mouth. He then descended toward the reef 50 feet below him.

Several divers swam up to Ray and pointed to the regulator in his mouth and then to a second regulator dangling below him. He simply nodded and swam off. None of the divers pushed the issue.

Ten minutes into the dive, Ray took a breath from his regulator and there was nothing there.

In his haste to begin the dive after entering the water without a regulator, Ray had grabbed the second stage from the pony bottle rather than the second stage attached to the scuba tank on his back.

He looked around, and none of the other divers was close enough to help. Ray panicked and bolted directly for the surface. He forgot his training and didn’t attempt to release the air in his lungs.

Ray surfaced rapidly, coming well out of the water about 50 yards from the dive boat. He signaled he needed help and then lost consciousness.

One of two things would have saved Ray’s life:

If he had descended using the proper regulator, he would have been fine, of course. When he realized he was out of air, if  he had switched to the other regulator  dangling from his dive gear, thinking it was the pony bottle but actually finding his primary second stage, he would have been fine. The scuba cylinder on Ray’s back was full. Instead of switching to it, he panicked. He wasn’t close enough to a buddy, and all conscious thought left his mind as he fled for the surface.

The medical examiner ruled the death a drowning, but this is a classic example of an air embolism.

From approximately 50 feet down, the air remaining in Ray’s lungs expanded to nearly two-and-a-half times its volume at depth. The expanding gas probably tore a hole in his lung tissue and released a bubble directly into the arterial circulation of his bloodstream.

In an air embolism, the bubble can go directly to the brain, causing stroke-like symptoms that appear within 15 minutes of surfacing.

In Ray’s case, it was immediate. It took the boat crew a few minutes to get to him. When they did, he was floating face down and unconscious. Ray most likely inhaled some water into his lungs.

It is rare for dive equipment to cause a dive accident or a fatality. This accident isn’t the fault of the equipment, but rather Ray’s use of it. He wasn’t familiar with the pony bottle and how to use it. He should have practiced retrieving the pony bottle second stage again and again until it became second nature. He should also have identified that regulator so he could not confuse it with his primary second stage.

This accident could have been averted by an equipment buddy check and having a buddy in the water. He should have asked someone on the boat to help him gear up and make sure everything was secured properly. The second stage from his pony bottle was loose, so he thought it was his primary in the water after his entry.

If he had a buddy, he might not have entered the water without his regulator in his mouth — although most divers will admit they have done something similar at least once in their diving career. Ray was effectively diving alone, and while many divers do that, they have the experience, training and equipment to be self-sufficient in the water. Solo diving is not for everyone.

In this case, several divers reported they noticed Ray was breathing from the wrong regulator. They signaled to him to switch, but when he didn’t understand none of them pressed the issue. They assumed he would notice he was on the wrong regulator and would switch to his primary without a problem.

You can ask how much responsibility you have for another diver in the water who isn’t your buddy, and that isn’t an easy question. However, the other divers on the boat, and especially those who tried to get Ray to switch, will now have to deal with the guilt of seeing a fellow diver die when there might have been something they could have done. They know that if they had corrected his error, he would still be alive. Riding a boat back to the shore while the crew works to save a fellow diver is a horrible experience.

1 Be familiar with your equipment. Everyone gets new equipment from time to time, but take the time to learn how to use it properly.

2 Seek training. Diving under the care of a dive instructor is a great way to learn new diving techniques and gain confidence. Even when you aren’t in a class, don’t be afraid to ask for help.

3 Stay close to your buddy in the water. If you aren’t trained in solo diving, stay with your dive buddy so you can help each other out and enjoy the dive together.

4 Practice emergency skills like emergency ascents. Remember to exhale whenever you ascend.

5 Learn to communicate underwater. This is something great to learn with a buddy. Develop a system or learn sign language so you can communicate more than just the basic signals.

Thanks to Eric Douglas and Scuba Diving

Note::::picture is not of Ray, but a copied pic from the net