Skip to content
Home/Blog :::: KSG Scuba Scoop/Waters of Lake Michigan are a treasure trove of sunken wrecks
Previous Next

Waters of Lake Michigan are a treasure trove of sunken wrecks

Roger Rice says the Bermuda Triangle, that polygon in the western Atlantic reputed to occasionally gobble up ships and aircraft, “has got nothin'” over the storm-battered waters off Wisconsin’s Door Peninsula.

“Lake Michigan was a nautical superhighway for schooners and freighters in the 1800s and early 1900s, and a lot of them (hundreds, in fact) went down on the shoals off Door County, at Death’s Door on the tip of the peninsula and over in Green Bay,” said Rice, a veteran scuba diver.
And while the boats and aircraft that (supposedly) went down in the Bermuda Triangle have never been found, divers can explore at least three dozen ships off the Door Peninsula. Some are in relatively shallow water, so snorkelers can get an easy look; others are more than 100 feet down, requiring scuba tanks and training.

Rice, 69, lives at the tip of the peninsula in Gills Rock, Wis. He got his scuba certification eight years ago, after a trip to visit his son in Hawaii.

“It looked like so much fun that I had to try it, and I was a little peeved I couldn’t dive with him because I didn’t have my license,” said Rice, who has logged more than 300 (and counting) dives since then off the Door and in California. He has no plans to slow down.

“There are wrecks out there all over the place,” said Rice, whom I met while diving on the Frank O’Connor last summer. The O’Connor, a 300-foot wooden steamship, sank in 65 feet of water several miles off the Cana Island lighthouse. It was launched in 1892 and went down in 1919 after a fire.
“And really, the boats are what make diving interesting, because the bottom of the lake is so flat,” he said. “It is really great to explore those old ships.” 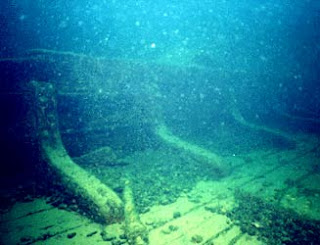 As we sped out to the wreck on a dive boat piloted by Jake Gransee, Rice said O’Connor is one of his favorite wrecks because its two large boilers and a 12-foot propeller remain intact.

“The thing burned and went straight down,” he said. “So the old steam engine is just sitting there on the bottom.”

Some 30 minutes later, I was geared up in a hefty wetsuit to keep out the Lake Michigan chill (it was about 50 degrees at 65 feet) and moving slowly down a buoy line toward the ship.

Just as Rice promised, the big propeller was still standing, connected to the steam engine. Unfortunately, the wooden sides of the boat had collapsed over the years and lay spread out on the bottom. Pieces of shiny coal used to fire the boilers nearly 90 years ago were scattered nearby.

The O’Connor was constructed by shipbuilder James Davidson, who built freighters in the late 1800s, when sailing was giving way to steamships. Davidson constructed his bulk carriers of wood rather than steel to save money. But they were fire traps and nearly all ended up burning.

As Gransee and I swam along the ship for the next 30 minutes, we could see layers of zebra and quagga mussels covering nearly every section of exposed wood and metal. Invaders from the Caspian and Black seas, these filter feeders are thought to have been brought to this country as ballast from tankers.

Since their colonization of the Great Lakes in the early 1990s, they have covered the undersides of docks, boats, anchors and spread into nearby streams. Widely despised, they can grow so densely that they block pipelines and clog water intakes of municipal water supplies and power plants.

But — for divers, anyway — they have an upside. Because they are filter feeders, they have greatly improved the visibility in the Great Lakes. The change has been dramatic, said Gransee, 38, who began diving when he was 14.

There are billions of these mussels in the Great Lakes, and studies show that they can filter roughly a quart of water a day.

Gransee, who grew up in Baileys Harbor on the Lake Michigan side of the Peninsula, said he began snorkeling around age 10 with a buddy.

“We went to a dive shop up in Gills Rock to get some gear, and the owner drew us a map of some wrecks in shallow water of around 12 feet in Baileys Harbor,” he recalled. “I forget the name of the boats, but after that, we were hooked.”

A self-described history buff, Gransee said he enjoys researching the wrecks he’s visited and imagining what the conditions were like when the ships went down in storms.

“I also like introducing people to wrecks they haven’t seen before,” added Gransee, who dubbed his dive charter operation “Dark Side” after the 1973 Pink Floyd album “Dark Side of the Moon.”
Gransee said he often takes divers to the O’Connor and then returns to the warmer and shallower waters of Baileys Harbor to examine the Emeline, a 111-foot-long schooner that sank in 1896 in less than 20 feet of water.

“It’s a nice wreck for beginners to explore, and the water is considerably warmer than down where the O’Connor is located, where it can drop into the 40s,” he said.

Gransee said he and his diving friends are always looking for new wrecks.

“There’s a lot out there that hasn’t been discovered,” said Gransee, who uses sonar to map possible dive sites. He was planning to purchase a ‘side scan” unit, which he said will “literally paint a picture of the bottom and really tell us what’s down there.”

“It would be great if we could find a new wreck in the 100- to 120-foot depth range,” he mused. “That would really stimulate interest in diving up here again. It was more popular in the past. And way back in 1969, National Geographic did a big story on Door County and devoted a whole section to wreck diving.”

In the meantime, he’s content to lead customers to lakeside wrecks that start just a few miles south of Baileys Harbor and include the Ocean Wave, a scow schooner that sank in 110 feet of water in 1869.
And he can go 20 miles north to the infamous Death’s Door, where three wrecks off Pilot Island went down so close together that they are touching. He also dives sunken ships on the Green Bay side of the peninsula and can even head north to islands off Michigan’s Upper Peninsula.

If you enjoyed this blog, you will enjoy reading Ross Richardson’s new book “Search for the the Westmoreland”

Thanks to the St Louis Dispatch