Why hammerhead sharks have such funny heads

There are more than 360 species of sharks: Big ones, wee ones, aggressive ones, sweet ones, sleek ones, and …really awkward-looking ones — specifically, the nine species of hammerhead sharks. The scientific genus name of hammerhead sharks is Sphyma, which comes from the Greek word for hammer. And hammer it does resemble. Unlike the aerodynamic streamlined heads of most sharks, the hammerhead has a big clunky head that appears to be at odds with the rest of its body, like a showgirl with an extra-cumbersome headpiece.

Although sharks are fish (rather than marine mammals), they give birth to live young rather than hatching eggs. If you’re wondering about the physical logistics of the hammerhead in this scenario, take solace in knowing that when the pups are born, their heads are round. It’s not until they reach maturity that the hammer-shaped head is in full swing.

The question is: Why, in all of her infinite wisdom, would Mother Nature lead an animal down such a curious evolutionary path? 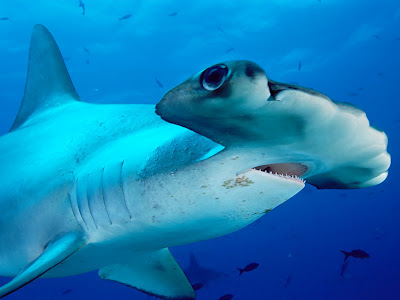 Well, these are sharks we’re talking about, so it’s little surprise that the answer has to do with finding prey. Hammerhead sharks are voracious predators and their mallet-shaped heads boost their ability to find that which they like to eat. The wide expanse of head allows for a broader spread of highly specialized sensory organs that they use to find food. And beyond smell and vision, these sensory organs are rather high-tech. The “ampullae of Lorenzini” group of organs allows the stealth hunters to detect electrical fields created by prey. The hammerhead’s increased ampullae sensitivity helps it track down its favorite meal, stingrays, which are usually hidden under the sand.

In addition, that funny wide head allows for very special placement of the eyes which results in — as counterintuitive as it may seem — outstanding binocular vision. The position of the eyes also allows the sharks to see above and below them at all times. In the meantime, by moving their head sideways as they swim, they can observe much of what is behind them. All the better to help find those stingrays.

And once they find dinner, hammerheads use that brute head to pin the stingray to the seafloor for the kill.

The largest of the hammerhead species can grow to be up to 20 feet in length, although more commonly they are relatively small. They have few predators and are considered harmless to humans. For the stingrays, it’s another story.

thanks to mother nature network