Diver checks off item on ‘bucket list’ with Bonaire dive

One item on my “bucket list” was to dive in Bonaire — mission accomplished.

Along with Aruba and Curacao, Bonaire is one of the ABC Islands that are the western-most islands of the Leeward Antilles in the Caribbean, north of Venezuela.

Bonaire’s licence plates proudly declare that it is a “Diver’s Paradise” and after experiencing the underwater beauty off its coast, I can vouch for that claim.

There are more than 60 dive locations along Bonaire’s shoreline. We dove the West Coast, which is calmer than the East Coast (known as the wild side), where more adventurous divers go for a different dive experience.

While on a recent cruise ship vacation, Bonaire was one of our six stops and I was excited to dive there in the clear blue water with a temperature of 28 degrees Celsius. I disembarked the ship at Kralendijk, the main town of Bonaire, where I was greeted by Claire Crowe, who volunteered to take me shore diving. My own personal guide! Luckily for me, Claire’s mother-in-law is a personal friend of mine.

We walked along the shore until we reached the Sponge Bob dive site, which is in front of Yellow Submarine, one of five PADI certified dive shops run by Dive Friends Bonaire. If you’re looking to rent gear, take a course, or have your own personal guide, they have it all. Their staff is friendly and welcoming. 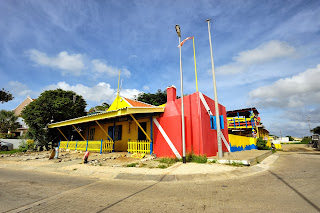 After gearing up, we proceeded down the “pool area” and slowly descended to our goal of 45 feet. The slower start and descent works better for me as there is minimal current. It makes for an enjoyable dive all around. Equalizing was not a problem as it can be on boat dives. The marine life was abundant and the trumpet fish put on a great colourful show. 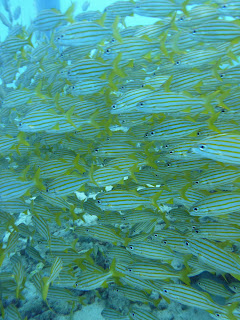 In order to protect the coral, Bonaire does not allow dive gloves or knives unless part of a dive clean-up program. Make sure you have the correct buoyancy to avoid contact with the coral.

Noticeably absent were the lion fish. Bonaire is trying to control this invasive species (STINAPA) with a lion fish hunting program so if you ever have the chance to dine on Lion Fish please do!

Bonaire is also a snorkelers paradise. Everyone from children to adults can enjoy the beautiful sights from the crystal clear water at the surface.

Some interesting facts about Bonaire: It was discovered in 1499 by the Spanish and became a Dutch island in 1633. It is known as the “Fish Capital of the Caribbean” and “Arizona by the Sea.” Flamingos are the island’s national symbol. Harvesting of salt has been a major industry on Bonaire for more than 350 years. The Caribbean sea here is as much as 5.2 miles deep. Bonaire was part of the Netherlands Antilles until Oct 10, 2010, when it became a special municipality of the Kingdom of the Netherlands.

The official language on Bonaire is Dutch, while the local language is Papiamento, which is a mixture of Portuguese, Spanish and Dutch. English is widely spoken on the island and the U.S. dollar is the official currency.

We finished our dive after about 40 minutes. Time flies when you are having fun. It was a grand day of diving in Bonaire and I would like to thank Claire for her great “guiding” and Dive Friends Bonaire for their wonderful hospitality. If you’re headed to Bonaire, contact them. They are a wealth of information, and will make your “bucket list” come true, like it did for me.